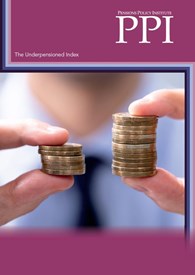 The Pensions Policy Institute (PPI) is today publishing The Underpensioned Index, kindly sponsored by Now: Pensions who are Gold Supporting members of the PPI, via the Cardano Group Membership.

Previous PPI work (2003, 2008 and 2016) on the underpensioned has identified that certain sections of the population (including women, BAME, disabled, carers, self-employed and multiple job-holders discussed in the report) are at greater risk of experiencing poor later life outcomes as a result of inequalities during working life. While policies designed with the aim of increasing pension saving and/or reducing inequalities during working life, such as automatic enrolment and increased pay gap reporting, have had positive effects, these groups are often still disadvantaged, so it is important to be able to measure the extent of later life inequalities and the way in which they develop over time. The Underpensioned Index produced in this research can be used to track inequalities in pension income over time in order to assess the progress of policies aimed at redressing these inequalities.