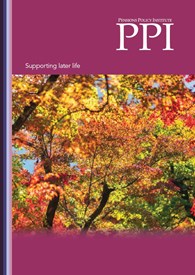 The Pensions Policy Institute (PPI) is today publishing Supporting later life. This report is the second of two reports in the series. This research series is sponsored by Age UK, DWP, The People’s Pension and WEALTH at work.

Decisions about how to achieve positive later life outcomes are becoming increasingly challenging. Increasing numbers are reaching retirement heavily dependent on DC savings, with little or no DB entitlement. Since the introduction of pension freedoms, they have greater flexibility in how they will access and use these savings. But they are also likely to live longer than previous generations of retirees have before them. With low levels of engagement and understanding of pensions and later life planning, this is a challenge that people will need to overcome if they are to achieve the best possible later life outcomes.

Following on from Living through later life, the second report in the series, Supporting later life, explores the complexity of financial and practical decisions older people may face, the current frameworks in place for supporting these decisions, and ways in which later life outcomes could potentially be improved.