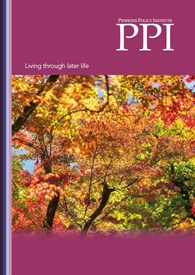 The Pensions Policy Institute (PPI) is today publishing Living through later life sponsored by Age UK, DWP, The People’s Pension and WEALTH at work.  As the average length of retirement has increased, alongside life expectancies, there is generally more variation in the experiences people will face over the course of later life. This report explores the range of experiences older people may face and how these are likely to evolve as health declines precipitate transitions between the three phases of later life.

This is the first report in a series of two, the second report due to be released later in 2019 will explore the ways in which government and industry could support people in achieving more positive later life outcomes.